A cat parasite called Toxoplasma gondii has been identified in Beluga in the western Arctic, which can cause blindness in people. For the Inuit people in the region who eat the whale’s meat, the discovery by University of British Columbia scientists has prompted a health advisory.

The free movement of pathogens is the result of the warming of the Arctic according to researchers. In the past the glacier condition acted as an obstruction to infectious agents. 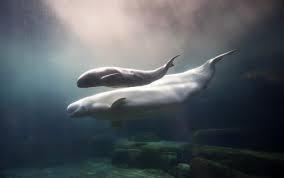 According to molecular parasitologist Michael Grigg, “Ice is a significant ecological barrier and it influences the way in which pathogens can be transmitted in nature and your risk of exposure. The changes in the Arctic is that new pathogens are emerging which are causing diseases in the region that haven’t been there before”.

Toxoplasma gondii is found everywhere at lower latitudes and many people carry it with no ill effects but it is poses threat for pregnant women and individuals with weak immune systems.

The researchers are now trying to find out how the parasite got into the whales. They suspect the influx of cats to the Arctic brought in as pets will have imported the pathogen. The contents of their faeces will somehow have got into watercourses and then been washed into the ocean. And with the significantly warmer temperatures in the Arctic now, liquid water is mobile for longer.