You are here: Home / Health / ADA recommends early use of fluorides to fight tooth decay in kids

Tooth decay is the most common chronic disease found in American kids. In order to put a check on it, the American Dental Association has released a new set of guidelines to get the kids rid of their dental problems.

The American Dental Association (ADA) suggests children to begin use of toothpaste with fluoride as soon as they get their first tooth. They say this will help in fighting cavities.

“About 25 percent of children have or had suffered cavities before stepping into kindergarten. The figures are alarming. So it’s important to provide dental guidance to the parents to help prevent their children from developing cavities,” Dr. Edmond L. Truelove, chair of the ADA’s Council on Scientific Affairs, said in a press release. 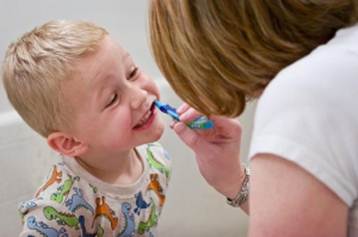 For children under 3, parents should use just a smear to fight cavities. For kids between  3 and 6, a pea–sized amount is advised.

In its previous guidelines, the ADA had recommended kids under 2 to have their teeth brushed with water before going for fluoride toothpaste (by the time they are 6-year-old).

The changes into the guidelines comes after ADA’s new review found that brushing with fluoride toothpaste had statistically significant benefits on preventing decay and cavities in children.

The new review was published in the February issue of the Journal of the American Dental Association.

According to ADA report, more than 16 million kids in the United States have untreated tooth decay. The dental problems are causing them and their parents to miss millions of hours of school and work and dollars cumulatively.