A minivan, part of a church group of three vehicles carrying seven members was traveling from Dugway to north to Salt Lake City.

In an attempt to join from the slow lane into the fast lane on state Route 36 adjacent Stansbury Park, around 3:20 p.m. the rear bumper of minivan struck a sport utility vehicle, which caused the minivan to lose control, said Utah Highway Patrol trooper Evan Kirby.

A red Subaru then struck the passenger side of the minivan. Both occupants in the Subaru were killed.

“After it lost control, it slid into oncoming traffic and was T-boned on the passenger side,” Kirby said. 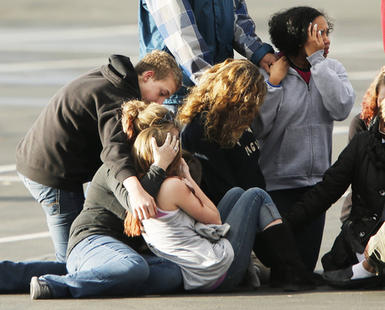 The five members were teens aged 13-17 and the other two were adults. The van’s adult passenger was killed and four of the teenagers were thrown from the vehicle and they landed on the roadway. They were conveyed by medical helicopters to hospitals in Salt Lake City and Tooele.

The other two passengers were also hospitalized.

“The children that were ejected were ejected quite a long ways,” Kirby said. “At this point, I would estimate 20 to 50 feet.”

The occupants of the minivan were part of a youth group from Dugway Hope Chapel traveling to see a concert.

Crews closed down S.R. 36 between Mills Jct. and Village Blvd., to restructure the accident and clean up fragments. Shortly after 8 p.m., they cleared the scene and reopened traffic.

Kirby said that among the victims there were people who were wearing their seat-belts but she didn’t assure about all of them.