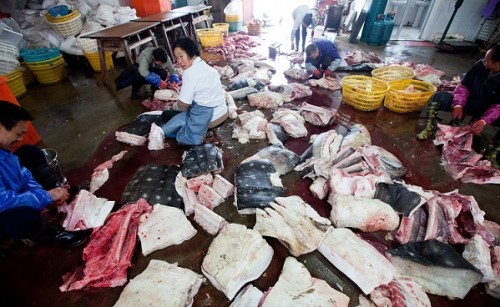 Endangered species are identified by the IUCN Red List, the most comprehensive inventory of the global conservation status of species in the world.

Growing as much as 40ft (12 metres) ,the whale shark is also the largest fish in the world and can weigh around 11 tonnes.

The revelation has been made public following a four-year investigation by WildLifeRisk. 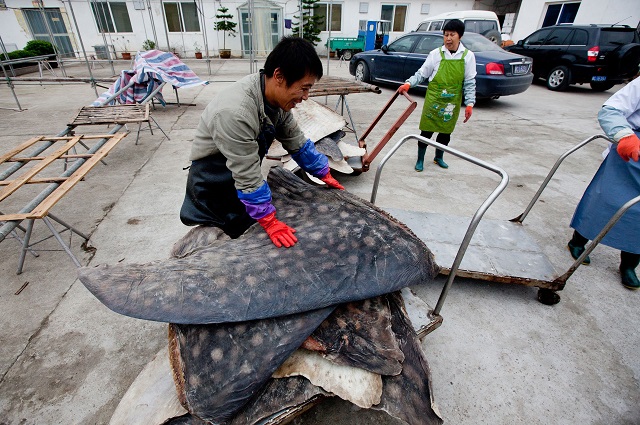 “How these harmless creatures, these gentle giants of the deep, can be slaughtered on such an industrial scale is beyond belief,” Paul Hilton and Alex Hofford, WildLifeRisk’s directors, wrote in a report. “It’s even more incredible that this carnage is all for the sake of non-essential lifestyle props such as lipsticks, face creams, health supplements and shark fin soup.”

“We are calling on China’s regulatory authorities to enforce the international agreements on this illegal activity now, before these animals are brought closer to extinction.”

The Convention on International Trade in Endangered Species of Wild Fauna and Flora (CITES) to which China is a signatory, mentions that the international sale of products from an endangered species is illegal and the trade is unjustifiable.

WildLifeRisk captured undercover footage of the killing floor for those with strong stomachs.

The WildLifeRisk statement pointed out that if whale sharks are to elude being hunted to extinction, consumers must be convinced to castoff whale shark products, or any other kind of shark-related products.