This may be an unlucky year for Broncos as an ape in Utah, which is famous for its correct predictions, has picked the Seattle Seahawks as the next NFL champion.

Eli, an ape in the Utah state, is famous for its correct predictions for six straight years about the winner of the Super Bowl.

On Thursday morning, when papier-mache helmets bearing logos of different participating teams were kept infront of the ape in Hogle Zoo of Salt Lake City, it swiftly knocked down the helmet bearing the Seahawks logo, signaling his pick.

“He made his pick without any hesitation,” said Erica Hansen of Hogle Zoo. 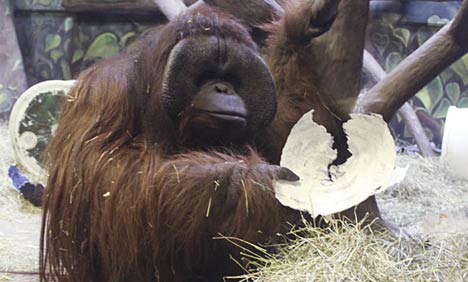 Hansen says that the 13-year-old primate hasn’t been wrong since 2006 but this year many Broncos fans are hoping that this is its first wrong year.

Eli’s prediction of this year has drawn mixed reactions from his team of zookeepers that include avid Broncos fans.

Last year, Eli has knocked over a papier-mache goal post decorated with the Ravens logo. Interestingly, the Ravens beat the 49ers 34-31.