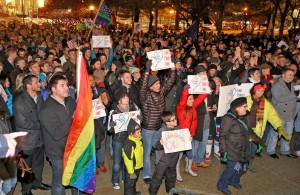 Washington: The Supreme Court on Monday put same-sex marriages on hold in Utah, pending an appeal by the state to overturn a lower court’s ruling.

The decision will hinder further same-sex marriages for some weeks in Utah. Both the sides were instructed to submit legal arguments by the end of this month by the 10th Circuit Court of Appeals, based in Denver.

The one-paragraph  order is unsigned and did not spell out the court’s reasoning in the case. The order did not indicate any defiance. 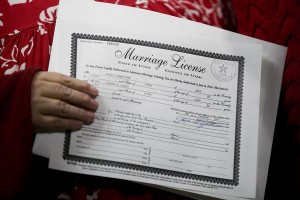 The order grants an emergency appeal by the state following the Dec. 20 ruling by U.S. District Judge Robert Shelby that the state’s ban on same-sex marriage violates gay and lesbian couples’ constitutional rights

James Magleby, a lawyer for couples who sued to overturn the ban, said that while the pause to same-sex marriages is not permanent — assuming the appeals court does not reverse Shelby’s ruling — it is disappointing because it leaves Utah families waiting to marry until the appeal is over.

Justice Sonia Sotomayor, who handles emergency appeals from Utah and the five other states in the 10th Circuit, filed the state’s request.

Approx. 40 lawsuits seeking marriage rights for gays and lesbians are pending in 20 states across the nation. Trials are set for February in Michigan and June in Pennsylvania. A lost case has already been seen in Nevada, followed by an appeal to the 9th Circuit Court of Appeals.

“In the end, justice will be served, and no couple will be excluded from this cherished institution,” said Chad Griffin, president of the Human Rights Campaign, the nation’s largest gay rights organization. “As the marriage equality map expands, history is on our side, and we will not rest until where you live is not a barrier to living your dreams.”

And in several cases, couples legally hitched in one of the 17 states and the District of Columbia where same-sex marriage is legal are seeking to have those marriages recognized elsewhere.