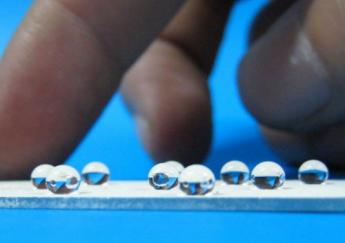 Research has discovered that appropriately designed rough facade can trim down skin-friction drag.

Scientists in University of California who conducted experiment on various hull designs landed on a surface roofed with tiny ridges as being finest for smooth maneuvering. They found that a rough surface reduced drag created by the friction of flowing water, even in irregular conditions. The researchers modeled both laminar and turbulent flows, and surprisingly came across that the drag-reduction was more in turbulent surroundings.

John Kim, a professor in the mechanical and aerospace engineering department at UCLA, Los Angeles and his team researched that it’s not only the rough surfaces, but also the surfaces that are hard to wet, a property known as superhydrophobicity. This word means “water hating” (hydrophobic) at a high level (super). In nature, superhydrophobicity occurs in lotus plants, which wick away moisture from their leaves.

This explains that the exterior is capable of entrapping air bubbles, forming a tiny cushion of air around the hull of the vessel. The UCLA team’s design was successful because it kept these air bubbles trapped, and did not detach them in turbulent waters.

Further down the line, such surfaces might cover the undersides of cargo vessels and passenger ships. “It could lead to significant energy savings and reduction of greenhouse gas emissions,” Kim said.

The scientists are not the first to research the prospective of rough surfaces in dipping drag; but, prior studies have had limited accomplishment.

The researchers report their findings in the journal Physics of Fluids.