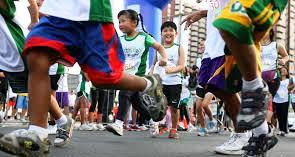 PROVO, Utah – A charity race was held in Provo after about two months, the Typhoon Haiyan destructed the Philippines killing about 6,000 people. The race was held on Saturday to raise funds for the people who were devastated in the typhoon.

Run 4 Philippines held two types of races, one was a 5K run and another was 10K run. It proceeds from the event go toward the relief efforts in the Philippines, like rebuilding projects and efforts to supply food and water for the deprived.

Run4Philippines.com is an organized humanitarian effort to aid those who underwent from the devastation and ruin cause by Typhoon Haiyan. Their purpose is to bring the community together and give everyone an opportunity to make a difference.

Utah Attorney General Sean Reyes was also a part of the event. The event became more personal as his father is also a Filipino.

“This was put together very quickly,” he said of the event. “A bunch of people just trying to do good, and it represents what the state of Utah is all about: volunteerism, service. And from the stories that I’ve heard from my family there and from my dad, boy, everybody needs it.”