You are here: Home / National News / One Deputy Shot Dead, Another Injured In Utah County 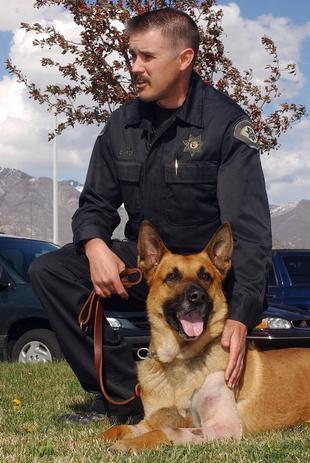 SALT LAKE CITY — On Thursday afternoon, a man with a rifle fatally shot a Utah County Sheriff’s deputy and injured another one along a highway. The first shooting occurred around 1 p.m. on SR-73 in the Eagle Mountain area during a chase that stretched over 50 miles before the man was caught.

Utah County Sheriff’s Sgt. Cory Wride, who was beginning his 20th year with the department pulled up behind a vehicle that seemed “either abandoned or disabled” on roadside.

“From our preliminary investigation, it appears that Sgt. Wride was ambushed at that time and he was shot in the vehicle and he did not survive his wounds,” Tracy said.

The second officer betrothed the suspect in a high-speed chase in the Santaquin area. The deputy Greg Sherwood, a 13-year law enforcement veteran who had worked as a K-9 handler with the Utah County Sheriff’s Office for two years, was shot near the intersection of Center St. and Main St. shot.

He suffered a head wound and was rushed to Utah Valley Regional Medical Center for surgery.

The man was arrested in neighboring Juab County after crashing a car and trading fire with other officers.

The suspect was critically injured in the gunfight. He was also taken to the same hospital for surgery. His condition was unknown.

After shooting Sherwood, the gunman took off again, driving south on Interstate 15, but he crashed his car and hijacked another at gunpoint, Tracy said.

The man shot at other motorists who unsuspectingly halted to help him, but he didn’t hit any of them, the sheriff said.

The suspect had been staying in a Draper home, 12300 South and 300 East, and officers served a search warrant on that home Thursday night.

“A warrant for a suspect that was involved in the police shooting today. He was pulled up and was unloading things from his garage and was putting things in his truck,” said neighbor Patti Hart. “We haven’t seen the guy that lives there for a couple weeks.”