With little relief in sight as the inversion continues to trap emissions in the valleys, Northern Utah region, which runs along Wasatch Mountains, remains under a health alert from high soot counts.

On Monday, Salt Lake and Davis counties were in the worst shape. Lung-busting particulate counts exceeded the federal standard by about 82 per cent.

The Cache County exceeded the count by about 50 per cent.Other parts of region were approaching the level that are considered to be unhealthy. 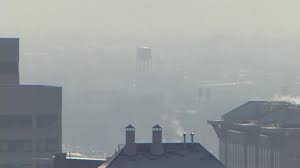 The situation has forced the administration to ban people from wood-burning. It also appealed people to drive less at this stage.

The Utah Division of Air Quality on its website reported that only Washington County had green or healthy air on Monday.

The division also forecasted that the same situation will prevail at least till Wednesday.The week, bad or polluted atmosphere added mores worries to an already diseased winter. The Salt Lake Valley area has already endured 21 mandatory action days as of Monday. Last season saw the highest air pollution levels in a decade. The Salt Lake Valley had 35 mandatory action days at that time.