You are here: Home / Tech & Science / NASA’s Hubble and Spitzer spot ancient galaxies that may lead to early universe

NASA’s Hubble and Spitzer Space telescopes have caught a rare quartet of galaxies that may reveal many facts about the early universe.

The four galaxies, that are said to be more than 13 billion years old, are incredibly bright and luminous.

The discovery was announced on Tuesday at the American Astronomical Society meeting in Maryland. The meeting was called to discuss upon the growth and development of some of the earliest galaxies.

Shedding light on the discovery,  Ray Villard, spokesman for the Space Telescope Science Institute, , said, “ It is like seeing the finale of a fireworks show, just that it’s close to the beginning of time.” 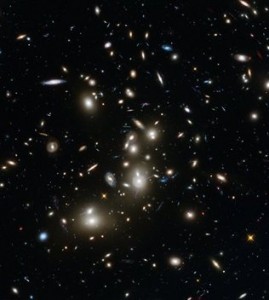 Lead author Pascal Oesch, an astronomer at Yale University, says the newly discovered four galaxies are about 20 times brighter than they ought to be. They have a bluish light that reveals that they’re bursting with star formations.

Oesch said interestingly, if the scientists get an opportunity to see them in real time, they would potentially dwarf Earth’s galaxy.

The latest findings by Hubble and Spitzer telescopes have raised hopes among the scientists over the success of NASA’s infrared-optimized James Webb Space Telescope which is set to launch in 2018.

Scientists believe that the Hubble has opened prospects for the advanced James Webb Space telescope to see even more from this obscure era in the universe’s history.