You are here: Home / National News / Mobile Home Destroyed By Fire In Provo 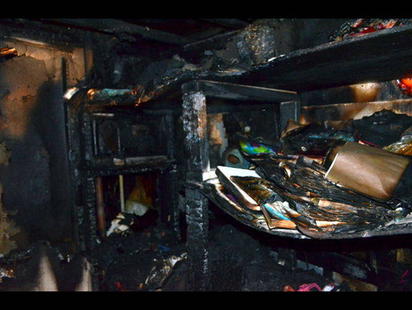 PROVO — A Provo woman and her two children escaped without injury after their 50 years old mobile home was destroyed in a fire on Saturday morning.

Letica Quesada noticed a smell of smoke in the Brough trailer at 850 W. Columbia Lane #29. She alerted her two daughters Kenya Huertado, 12 and Giselle Huertado, 15 and they escaped their burning home, according to a news release from Fire Marshal Lynn Schofield of Provo Fire and Rescue.

Giselle said her mother first told her to get a bucket of water, but she couldn’t find anything because of the smoke.

After their escape Quesada called the fire department.

“All I wanted to do was just get out, be safe,” Giselle Huertado said. “You don’t really think of anything, like grabbing anything, it’s just like it happens really fast

They were able to escape the burning home and call for help about 12:15 a.m., officials said.

It took approx. 30 minutes to the firefighters from three different stations to put out the inferno. After an investigation, the fire was found to be caused by an electrical malfunction.

The fire caused about $80,000 worth of damage. The trailer was completely shattered, officials said.

The Red Cross supported the family with a temporary housing. The family is not having any relative in the area.

“When you see it happen to other people it’s like, ‘Oh it happened to them,’ but when it happens to you it just like hits you real bad,” Giselle said. ‘It’s sad seeing all your stuff gone. It makes you stronger and you realize what you had and appreciate the stuff.”

Provo Fire Marshal Lynn Schofield encouraged residents on Saturday to install working smoke alarms in every sleeping area of a home, as “that’s your earliest warning that there is a problem within your house.”

“We are really fortunate this time,” he said. “This could have had a much more unhappy outcome.”