The theory of survival of the fittest is becoming very apt with the polar bears these days. A new study conducted by American researchers has found that the polar bears in the Arctic regions are changing their hunting pattern and source of prey as the regions ice is melting day-by-day.

The study carried by researchers at the American Museum of Natural History found that the melting sea ice is threatening the long term survival of its resident polar bear by separating them from the seals that have been their staple prey for generations. However, the bears are attempting to adapt to the situation by shifting their hunting grounds and sources of prey.

Robert Rockwell, a museum researcher of ornithology and Linda Gormezano, a postdoc researcher based in the Museum’s Division of Vertebrate Zoology were the authors of the study.

In the study, the researchers have depicted the rising threat to the polar bears and also highlighted  the alternative dietary choices that the western Hudson Bay’s polar bears have been resorting to as their habitats lose ice cover. 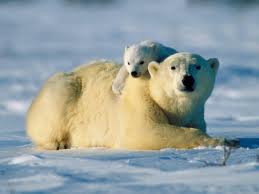 The ice has been melting in greater volumes year by year and the bears have consequently been losing access to the seals.

According to the researchers, the bears analyzed in the study  have their own method to deal with the situation. They were found moving inland sooner and considering more of the inland wildlife and plant fauna for their food sustenance. Snow geese and their eggs were among the emerging favourites of the polar bears.

The findings of the study were published in series in three journals:

Notably, the continuous disappearance of the sea ice has caused huge numbers of polar bears to starve and bear populations have indeed declined.

This is the reason why polar bears are now on the U.S. Endangered Species Act and are designated as “vulnerable” on the International Union for Conservation of Nature and Natural Resources’ Red List of Threatened Species.