You are here: Home / Health / McDonald’s the New Weight Loss Formula for a Science Teacher

In an update to to the 2004 documentary “Super Size Me,” in which filmmaker Morgan Spurlock ate nothing but McDonald’s for a month leading to abominable upshots to his health, John Cisna, a science teacher at Colo-Nesco High School went on an all-McDonald’s diet for three months and actually lost 37 pounds. 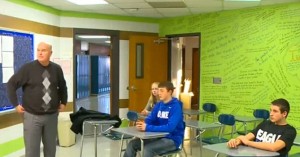 He did the experiment along with three students. And when he approached his local McDonald’s franchise regarding the same, the manager agreed to provide 90 days of meals, free of cost,  in the excitement of the resulting outcome.

Cisna planned a strict diet using McDonald’s food to plan meals that would result in a 2,000-calorie-a-day diet. The meal plan also would not overshoot the proposed dietary allowances for nutrients like carbohydrates, proteins, fat calories and cholesterol.

His typical meal consisted of 2 egg white delights and maple oatmeal with 1 percent milk in the morning, a salad at lunch and a traditional value meal for dinner.

Mr. Cisna admits that he didn’t exercise or watch his calorie intake before, during the three months. He also walked for 45 minutes a day, which undoubtedly contributed to the results.

In addition to the weight loss, he also saw his low-density lipoprotein, also known as ‘bad cholesterol’, drop from 173 to 113.

‘I tell people not only can I see my shoes now but I can actually tie them,’ he said.

What’s more, his experiment verified his theory that many people have the wrong idea when it comes to how to be healthy.

‘The point behind this documentary is its choice. We all have choices,’ he said, explaining: ‘It’s our choices that make us fat, not McDonald’s.’