You are here: Home / Health / Breath Test May Detect Signs of Lung Cancer 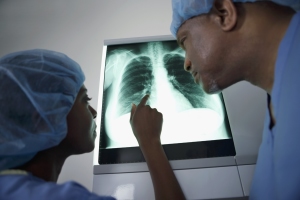 A new study published out of Sweden shows that the human nose may be able to detect an early-stage lung cancer.

The exhaled breath of people with doubtful lung lesions that were detected on CT scans was tested by researchers. The breath was tested for levels of four cancer-specific volatile compound, called “carbonyls.”

The breath samples were analyzed using a silicone microprocessor and mass spectrometer developed at the University of Louisville.

“Instead of sending patients for invasive biopsy procedures when a suspicious lung mass is identified, our study suggests that exhaled breath could identify which patients may be directed for an immediate intraoperative biopsy and resection,” Michael Bousamra, associate professor of cardiovascular and thoracic surgery at the university, said in a news release.

The research shoots from anecdotal proof of certain diseases carrying specific smells. For instance people suffering from diabetes can have breath that smells like rotten apples or acetone.

Eight individuals were injected with either a saline solution, or lipopolysaccharide (LPS), a toxin that is known to activate the immune response. The procedure was one by scientists from the Karolinska Institute.

They were then asked to wear tight T-shirts for four hours, to aid sweat absorbance.

Those injected with LPS experienced elevated body temperatures and increased levels of a group of immune system molecules known as cytokines.

Another group of 40 participants was engaged to smell and evaluate the sweat samples. Overall, T-shirts from the LPS group were said to have more intense and unpleasant smell in comparison to other sample.

The research was presented at the 50th Annual Meeting of The Society of Thoracic Surgeons in Orlando, FL, this week.