13-year-old Jahi McMath, who was declared brain dead after complications from surgery last month at Children’s Hospital Oakland, has been shifted to an unnamed facility, the family of the teen said.

“She is no longer with the Oakland hospital and has been transferred to a facility that will provide her care,” the family and their lawyer said while declining to identify the facility citing privacy concerns.

The 13-year-old teen was released on Sunday night by the hospital to the Alameda County coroner, who then released Jahi to her mother’s custody.

Last week witnessed a big fight between the hospital authorities and the girl’s family as the former sought to remove Jahi from a ventilator after doctors and a judge concluded she was brain-dead. The relatives, however, took to the court to keep her on the ventilator saying she showed signs of life. 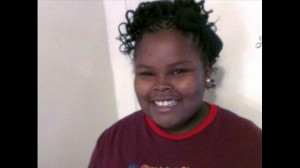 When Jahi’s uncle Omari Sealey was approached, he said, “We are relieved that she is no longer at the hospital. Her condition has kept us emotionally drained. For us, as long as her heart is beating, she is alive.”

Jahi was declared brain-dead on December 12, three days after sleep apnea surgery. The Alameda County coroner’s office issued a death certificate on Friday, recording December 12 as the date of death.