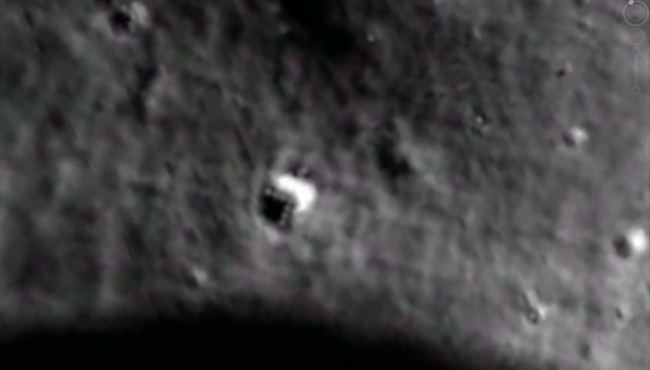 A mysterious triangular wedge-shaped object looking similar to an alien ‘spaceship’ has been spotted on the Moon by Google maps. Is this another indication of Aliens on Moon? Is it part of an alien spaceship located under the dust of the moon, or a mysterious moonbase occupied by humans?

The cluster of questions started arising as it shows something unsolved on the surface of the moon.

The contentious images shows rows of seven light dots along its edge that have been equated to an alien base or spaceship.

Google Moon uses the Google Maps interface to show satellite images from the moon. It was launched by Google on July 20, 2009, the 40th anniversary of the Apollo 11 lunar landing.

The two-sided object on the lunar surface was revealed by a paranormal researcher, identified as WowForReel, who posted a video of the finding online.

“It’s unique and unusual in the area,” said WowForReel.

The website Techandgadgetnews states: The gigantic shape actually looks like the leading edge of an immense, triangular space ship, similar to, so far, super secret stealth aircraft technology, but is much larger than any airplane ever built on Earth.

However, it is much larger than any airplane ever built on Earth, it said.

The YouTube video description added: ‘After going there on Google Moon and staring at this thing for quite a long time I can say yes, it is really there, not faked and I have no clue what it is.

Google Moon is available on the Web at moon.google.com.