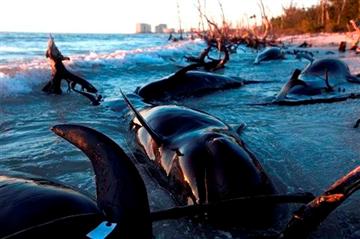 MARCO ISLAND, Fla. (AP) – In context to the investigation regarding the death of 25 pilot whales found in the shallow waters off southwest Florida, teams of biologists performed other Necropsies that began Friday morning. It was done on 16 males and nine females found on Kice Island.

Necropsies on Tuesday’s eight whales showed they all had “empty stomaches.

Officials of National Oceanic and Atmospheric Administration’s Fisheries Service say the whales were part of a pod first spotted in the area on Sunday. State wildlife officials has made some identity marks on some of the whales that had temporarily stranded near Naples, which aids in identifying the marine mammals found near Marco Island.