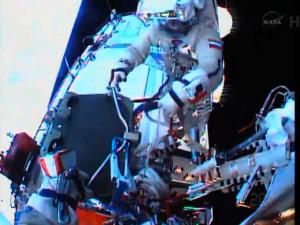 On Monday Oleg Kotov and Sergey Ryazanskiy endeavor outside the International Space Station to install a pair of new high and medium definition cameras.

The mission emerged to have been triumphant, even though reports states that one camera’s data link was experiencing problems. However, UrtheCast said in a statement today that both Earth-imaging cameras were working.

The men hooked up the Earth-observing cameras during a spacewalk right after Christmas. But there was no data stream found in the cameras, and the space walkers had to take the whole thing back inside.

The reason behind the problem was found to be indoor cabling and fixed.

Images from these new cameras will be distributed by the Canadian company UrtheCast Corp. The pair of cameras was built by UrtheCast. The cameras were launched to the space station in November in a deal between UrtheCast and the Russian Space Agency.

UrtheCast Corp. is a Vancouver-based technology company. Working with renowned aerospace partners from across the globe, UrtheCast has built, launched, installed and expects to operate, two cameras on the Russian segment of the ISS.

The Expedition 38 commander and flight engineer were in the middle of setting up the cameras, which were provided by Canadian firm UrtheCast in a deal with the Russian space agency, but had to for the time being discard the project when the cameras didn’t send any data.

“Contrary to the online broadcast of the installation, the telemetry was received by Mission Control Central near Moscow,” the firm said. “During the installation, we were able to complete all of the intended tests during the spacewalk. At this time, all telemetry received and analyzed is within our expected results.”

The cameras will be providing Earth views to internet-based subscribers from their perches on the Zvezda service module, in a service billed as “the first Ultra HD video platform of Earth, streamed in near realtime”.

UrtheCast suppose to spend three months to calibrate the cameras and get the system up and running for customers who might want the feeds, like those in the environmental, humanitarian or agricultural field.

The four other space station astronauts – two Americans, one Japanese and another Russian kept tabs on the spacewalk from inside.

Prior to going back inside, Kotov, the station’s commander, was told to ensure the orbiting outpost “as the master of the house.”