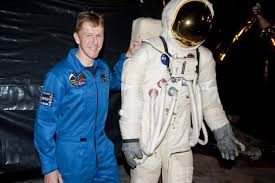 Britain’s first astronaut in around 20 years, Major Tim (Timothy) Peake has been undergoing a lot of frenzy training to set off to space. He is working for EAC (European Astronaut Centre).his first mission will be on 2015.

The countdown to blast-off has also included a week in an underground cave and 12 days under the sea. Apart from this Peake is also learning to take sickening ‘zero gravity’ trips and mastered Russian language to communicate with the International Space Station (ISS). He also added that if all this wasn’t enough he may take didgeridoo lessons.

The former test pilot from Chichester, West Sussex, England has no uncertainties about launching into space from Kazakhstan in a Russian Soyuz rocket in November 2015. He thinks it’s much less dangerous than his pilot job.

He told media, “I think my future career is probably far safer than my past career. I’ve carried out some fairly high-risk flight tests. I’m not overly apprehensive.”

Peake is right now getting training at the European Astronaut Centre in Germany. BBC science communicator Pallab Ghosh spoke to Major Tim as he trained underwater in the center’s neutral buoyancy capability.