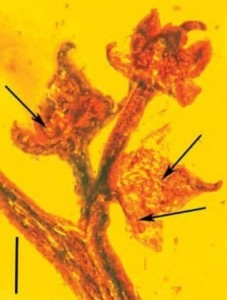 Researchers from Oregon State University discovered a “perfectly-preserved” example of sexual reproduction in flowering plants in a 100-million-year old piece of amber.

The research published in the Journal of the Botanical Institute of Texas was led by George Poinar, Jr., from the OSU (Oregon State University) College of Science. The research paper states that the amber fossil was taken from a mine in Myanmar.

The plant was identified as a new genus and species and was named micropetasos burmensis.

Encased within amber surroundings, a cluster of 18 tiny flowers is readily visible, including one that was in the process of manufacturing entirely new seeds. The preserved microscopic pollen tubes, beginning the seed-formation process was of much interest for the researchers.

The researchers said, “The numerous stamens have bisporangiate anthers and are of different lengths within the flower. As preserved, they are in a tight cluster appressed around the pistil. The gynoecium consists of a single carpel, whose short, curved style has an attenuate tip lacking an enlarged stigma.”

“The evolution of flowering plants caused an enormous change in the biodiversity of life on Earth, especially in the tropics and subtropics,” Poinar said.

Poinar also added, this is the first Cretaceous flower specimen showing the pollen tube entering the stigma. “This is the beauty of amber fossils. They are preserved so rapidly after entering the resin that structures such as pollen grains and tubes can be detected with a microscope,” said Poinar.