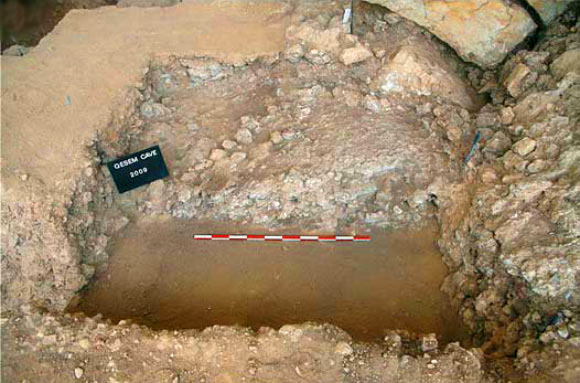 Fire, the most important innovations in humanity’s evolutionary history, lacks a trace in the archaeological record regarding its evolution.

The range of first turned fire from a natural phenomenon to a tool is absurdly large, straddling anywhere from 1.7 million years ago to as recently as 400,000.

A new study published in a paper titled “Evidence for the repeated use of a central hearth at Middle Pleistocene (300 ky ago) Qesem Cave, Israel,” in the Journal of Archaeological Science suggests that it happened at least 300,000 years ago, in what is today Israel.

The image sent by Ruth Shahack-Gross of the Kimmel Center for Archeological Science at the Weizmann Institute shows a 300,000-year-old hearth excavated in the Qesem Cave in Israel.

The centrally located fire pit is about 6.5 feet (2 meters) in diameter at its widest point, and its ash layers suggest the hearth was used repeatedly over time.

Archaeologists discovered large number of flint tools, used for cutting meat near the hearth area, as well as inside it. But a few meters away from the hearth, archaeologists found flint tools of a different shape, signifying a different purpose, Ruth Shahack-Gross of the Kimmel Center for Archeological Science at the Weizmann Institute, and one of the authors of the paper.

Samples collected were mixed with potassium bromide. The combination was then inserted into an infrared spectrometer. Using infrared spectroscopy, the team determined that the samples contained bits of bones and soil that had been heated to very high temperature.

The cook at Qesem Cave is still doubtful. A study published about three years ago in the American Journal of Physical Anthropology described teeth found in the cave dating to between 400,000 and 200,000 years ago.

“These findings help us to fix an important turning point in the development of human culture – that in which humans first began to regularly use fire both for cooking meat and as a focal point – a sort of campfire – for social gatherings,” said Ruth.