You are here: Home / Sports / Utah Ski Season Off to Strong Start 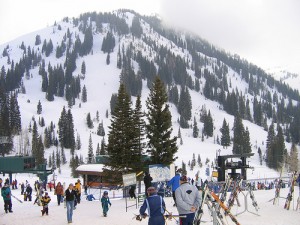 The ski industry in Utah is receiving a much needed shot in the arm during its early season. Sales of ski passes and reservations at ski lodges are up as the resorts are reaping the benefit of an economy that is slowly improving. The weather has even cooperated, with November building snow on the slopes.

Utah ski resort operators also hope that the Sochi Winter Olympics increase enthusiasm for skiing in the state, which hosted the Winter Games in 2002.

The majority of the 14 resorts in Utah are increasing their offerings for holders of season passes, daily visitors and beginners. Prices are being held, specials deals are being offered and most notably more multi-ski resort privileges are being made.

For vacationers who are not able to plan purchases during early season, one ski area is offering lift tickets for $25 on Thursdays and Sundays to anyone when it starts its season on December 19.

The season is beginning to look like a boon for the industry following a pair of years with unimpressive snow. In mid-November, 28% of the season had been already booked at Park City for lodging, which was 20% faster than 2012, said officials.

The bookings that are early come as the resorts on Park City prepare to celebrate a 50-year history with live music throughout the season, giveaways and fireworks.

Resorts around the area of Salt Lake City have been modernized since the Olympics in 2002 and skiers will see even more improvements this winter on the slopes. Lifts are faster at most resorts and one resort will have a snowboard park for girls only.

Snowbird has replaced its two-seat Gad 2 that was very slow with a quad that is high-speed, which has cut the ride time by 50% on its popular side of the mountain.

Another resort, Brian Head, located in southern Utah spent $3.5 million on magic carpet lifts and base lodges. Other resorts in the state have invested in grooming fleets, snowmaking and dining offerings.

Another convenience seen off the resorts is that the airport in Salt Lake City is served now by light rail, which is able to connect skiers with bus transfers to resorts. Mass transit is slowly shaping us as a verifiable alternative to renting a vehicle.